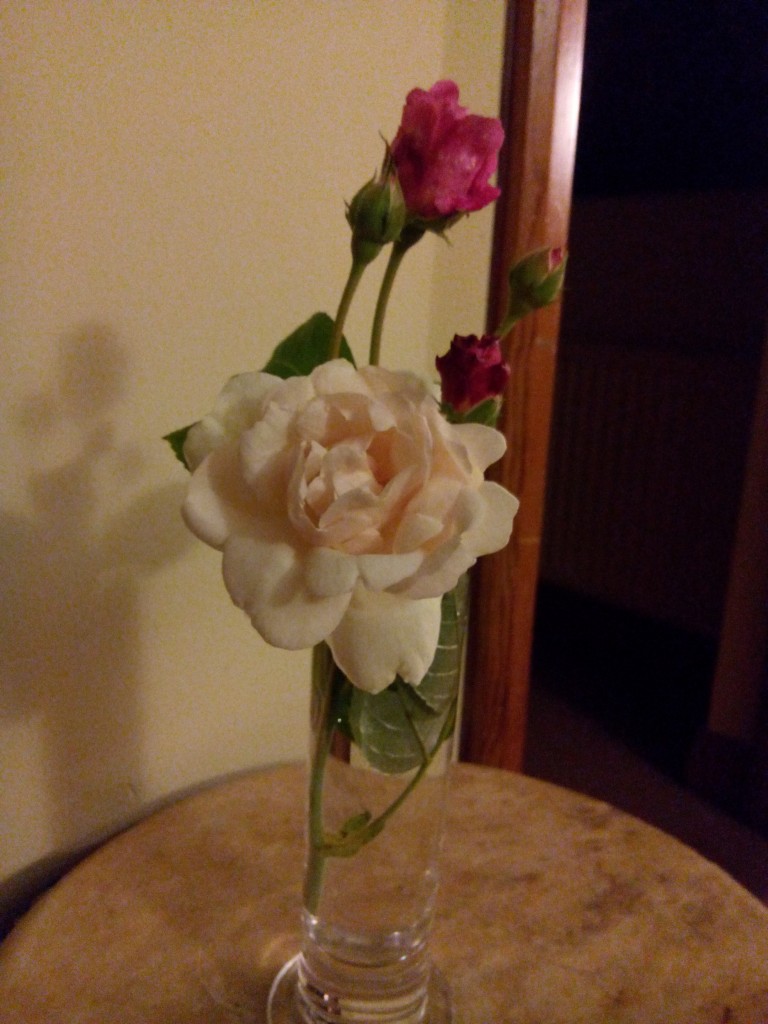 A strange night last night. After dreaming all night of a clear Remain victory, with a sense of safety permeating my sleep, I woke at 4am and hauled my phone from under my bed to check the results. Nothing was decided by then but the leanings were clear. Dark doors seemed to open where they were not before. Utterly unable to fall back to sleep I decided to do some pregnancy practice breathing and as soon as I did so, contractions began, first gentle and then more intense. I woke Eurik up at 6am, mostly because I thought the baby might be coming, perhaps partly also because I didn’t want to be awake and alone with the news.

No baby has arrived today, and I am glad 24th June 2016 will not be his birthday.  But the contractions in the morning, and the calm that the breathing brought about, made the strangest patterns in my thoughts. Although, of course, things can go wrong in pregnancy, the very fact of being pregnant and about to give birth feels to me like a state of near-incomprehensible wellness.  Whether it is creativity, spirit, change or child, this capacity to draw things through us is what makes us fully existent. In this nine months, the ancient flow of ever-ning has been a physical manifestation in my blood and beneath my skin. So within me, breathing, there was that – pain of contractions and a sense of deep wellness, a sense of participation in the igniting new existence of the world.

And then there was the news, and that was something else. I don’t know if anyone else has felt this, but to me, all through the campaign, there has been a sense of bizarre – and wrong – inevitability. It makes no sense, and yet for some massive, cold and terrifying reason it is still happening, as if we are in a dream over which we have no control. It feels as if we are heading towards something historical and very frightening and this is a way-marker on the rushing way. And maybe we are all being pessimistic, and the UK will be fine, and the EU will be fine, but maybe not. Maybe this part of something larger, and darker,  a shadow that is also part of a very, very difficult change.

So the things I think today, emerging from the paradoxical state of rightness and wrongness that I experienced at 4.30am this morning are, let’s just count our blessings. The darker the world gets, the more necessary it is for us to contract down to the awareness of what we have. People to love. Bare feet on grass that blossoms colour underneath the sky. The ability to witness roses. Water, at least, still where we are, so life can continue in utter magnificence, including, even, ours.

And if gratitude, like the mockingbird in the lullaby, isn’t enough to gentle and allay the world then let’s go deeper.  In this contraction to the miracle of subsistence, what basic essence of ourselves are we gifted with? In times which change incomprehensively and in which the battering of angry voices seems to leave no space for hope, what delays and hesitancies can we be released from and what new encounters out of the darkness can we make with ourselves?

And, indeed, what new encounters can we make with others? One thing throughout this past week that I have both experienced and heard from friends is a sense of the result as incomprehensible. I do not know anybody, I am not friends with anybody, who would vote to leave. But why not? Particularly if that is 52% of the country, and that 52% is passionate, angry and desperate enough to want to.  It does not just feel as if the two sides to this referendum communicated badly – it feels as if they exist in separate worlds, worlds divided in some part by class, privilege and education. It’s easy for me to call for a blessing count when I am writing in a garden (literally) full of roses and can see the grass and sky like great vistas outside my skin. I have been taught to see that and live in a place where I can. How can we hope to live in a world in which others are welcomed across our borders when the country itself is trapped in a system of othering dependent on pernicious spirals of class, wealth and degrees of hope?

So if gratitude is not enough, let it be a beginning, like an oncoming rush of consideration for the place in which we – still – live, and let it, then, spill outwards, wider and stronger, into a great fearlessness of being within it. Of doing the work and having the conversations. Of doing the work for conversation. Work for making the world – all over – a place in which we can hear what the people who walk beside us say.

Midsummer 2016 feels a hard time to be bringing a child into the world. The space into which he comes is as beautiful as I could wish it, but the times are tremulous and threatening, and I hope that he will also come into a time which is eventually rushing towards repair.  All I know is that it is, still, summer, the sun does rise and is at its peak, as is the green in the fields. By having things grow within the grass and sky we are still surrounded by wellness. May they continue to come through us, to sharpen and brighten and soothe us, and to remind us of what matters and who we are.

2 Responses to “On Blessings and Contractions”