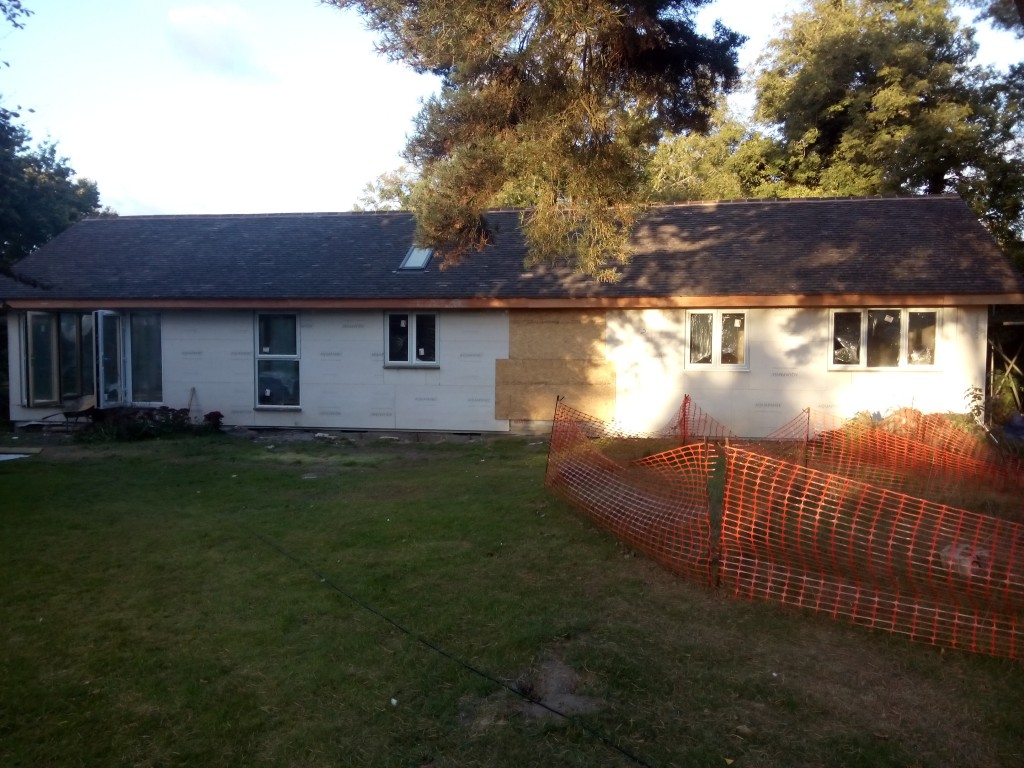 Our new house is looking beautiful. If you stand in front of the big house, and look down the garden, you see a small white bungalow, with silver, mossy tiles. It does not yet have a front door, so its central space is covered over with chipboard. It has windows, which get larger as you go from its south end to its north end, so that the north end is made mostly of glass. Its base is standing in the ruptured soil, still open, so you can see the breeze blocks on which it rests. Above it are Scotch pines, already dropping a coat of needles upon its tiles. It looks like a tentative, gradual construction, moving tentatively towards allowing life within.

A few weeks ago we were standing on the edge of our new build, looking at the pile of timber offcuts, plastic, plywood, chipboard, coke cans and assorted trash that had accumulated around the building like seaweed around the hulk of a ship, despite our efforts to reduce building waste. We were suggesting to our carpenter David that, as well as making the outside of the kitchen units from scaffold boards that had been left on site, he make the inside of the kitchen units from the plywood offcuts. He told us that he wouldn’t recommend it – they had been out in the rain too much (our own failure for not making an immediate rescue). Even if we had been more on it and taken them in as soon as they became part of the seaweed-style debris, he still wouldn’t recommend it, because there were much better options for the inner wood, options that would look better, smoother and be easier to work with. We respected his opinion and agreed to go for newly bought birch plywood. However, during the course of this discussion, he said something that struck me: “at the end of the day, you do want the best kitchen.”

Now I understand that in some senses it’s a question of practicality. There is no doubt that we would like a good kitchen rather than wonky towers of awkward shelving made from rotten wood and peeling board. As Eurik is constantly telling me as he dissuades me from spending all of our house budget at salvage yards, sometimes eco also means something well and purpose built that will last, work, and won’t need to be replaced six months down the line.

But David’s statement, and the implicit assumption of aestheticism within it, sent my thoughts spiralling out onto the nature of beauty itself (while David made our kitchen. This is maybe why I am a writer and not a carpenter).  How has our world become so divided that the comprehension of an object’s beauty has no relation to the interaction it has with the world? If the houses we build are now so “best” and so “beautiful” that they create great lumbering shadows of trash to be hidden away in other places, have we lost the meaning of the words? Timothy Morton argues that thinking ecologically abolishes distance. If we understood the nature of entanglement then the tip, with its rusty shards and steaming plastic stench, is an intimate part of our house, given that the other half of the beams and yards of timber that make up our threshould, corners, and walls are now lying within it.

So, to take my own thoughts more seriously, this is the answer I would like to give. No, I don’t want the best kitchen, if best means made out of a plethora of things born yesterday to satisfy tomorrow.  I don’t want the best kitchen – that’s too small a goal. I don’t even want the best house.  I want the best place on earth, that best placing upon the earth. I don’t just want beautiful kitchen units.  I want a kitchen that’s made the world more beautiful by conversing with it. My kitchen should not only have a beautiful presence in my house, but a beautiful absence, carving a space out of the massive accumulation of things we no longer need or want. What if, in a world that is being knocked off course by the amount of best things we think our best selves need, we made a decision only to purchase things that had both beautiful presences and beautiful absences? That’s what we should understand by best. A best with enough presence to have it’s own spacious shadow, not a shadow dragging material embarrassingly with it, like a dog with a can tied abusively to its tail. 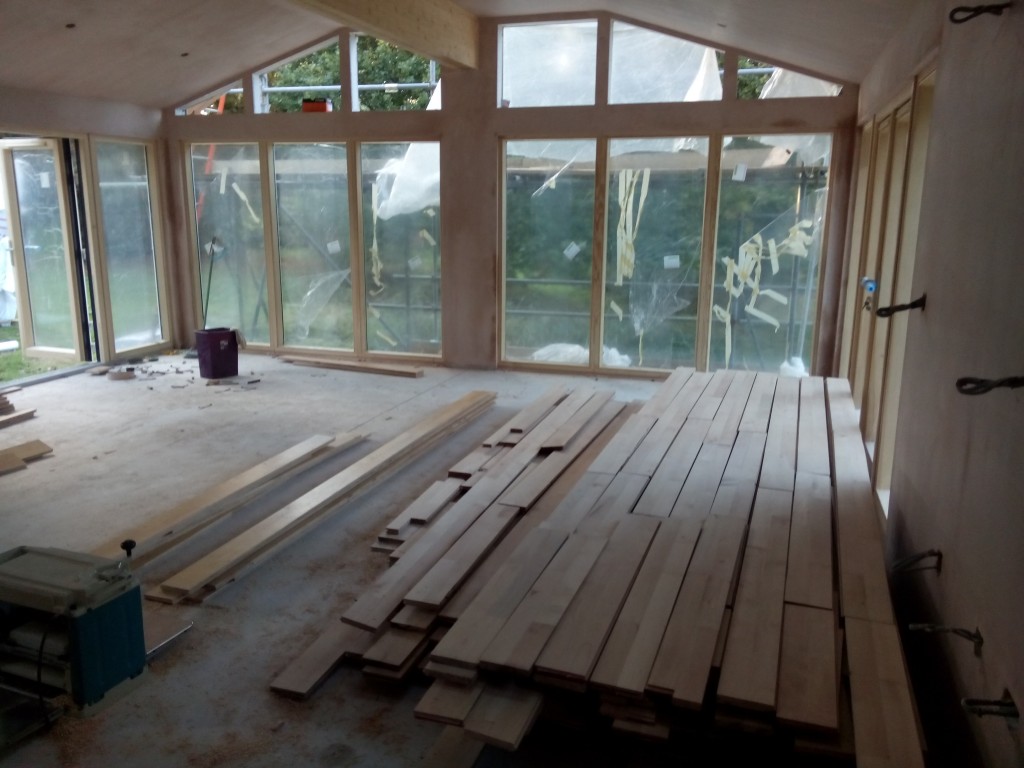 The floor has been laid this week – Eurik did the first sanding, and David laid and sanded it down. It’s beautiful but not best – the boards don’t fit together perfectly, there are hairline lines that lie occassionally between them. This is because it was not made for our house, but lived a previous life as a squash court in Bognor Regis. I found it on E-bay and then we picked it up from the back of someone’s garage. This involved one family trip to Bognor with screaming baby in tow, and two trips by Eurik and builder to transport 120 square metres of ex- squash court to our living room and subsequently down to the build.  Now laid, David has left seven bags outside the chipboard front door that wouldn’t fit on the floor, bags for us to use as firewood. Entangled with our pale, shining wooden floor is an absence of a dusty faded squash court in a garage in Bogner, and a series of nights in winter made warm. Not best. But maybe in moments good enough. 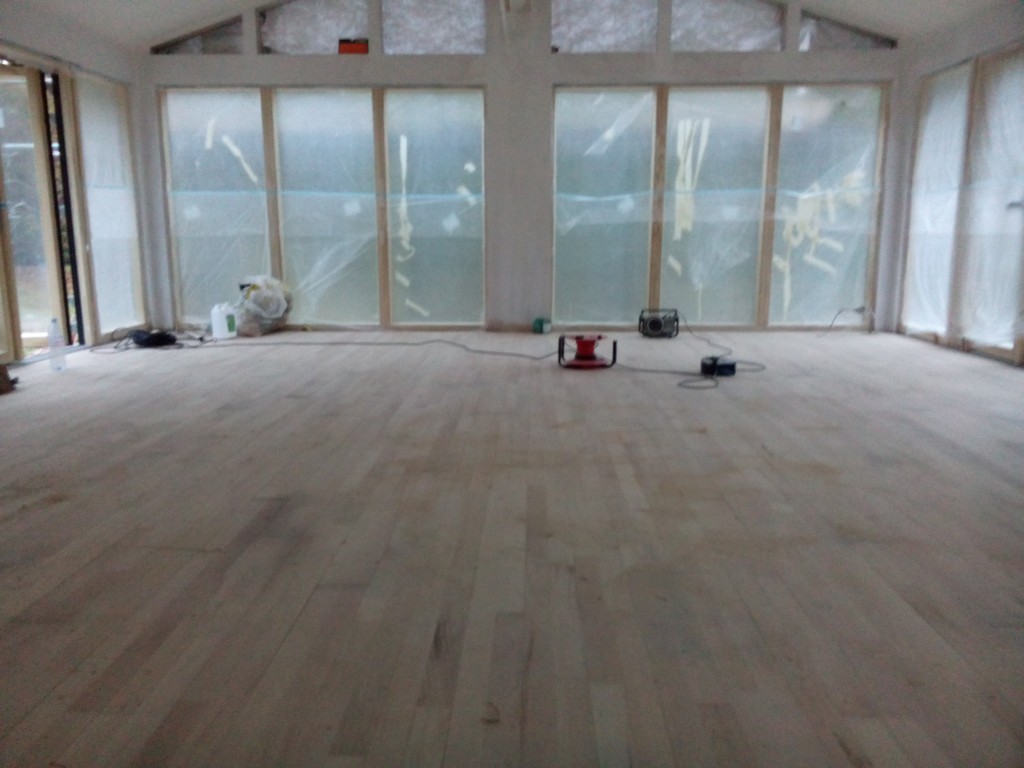